It seemed inevitable, but now it’s been officially confirmed: Glastonbury, the world’s biggest music festival, will not be going ahead in 2020 due to the coronavirus pandemic.

Co-organisers Michael and Emily Eavis announced the cancellation of the event in a joint Twitter statement Wednesday morning, stating that tickets will roll over to next year.

“Clearly this was not a course of action we hoped to take for our 50th anniversary event, but following the new government measures announced this week – and in times of such unprecedented uncertainty – this is now our only viable option,” reads the statement.

On Monday, the UK government urged people to avoid crowded places, gatherings, and non-essential travel to quell the spread of the coronavirus (COVID-19).

You can read Glastonbury’s full statement below:

We are so sorry to announce this, but we are going to have to cancel Glastonbury 2020. Tickets for this year will roll over to next year. Full statement below and on our website. Michael & Emily 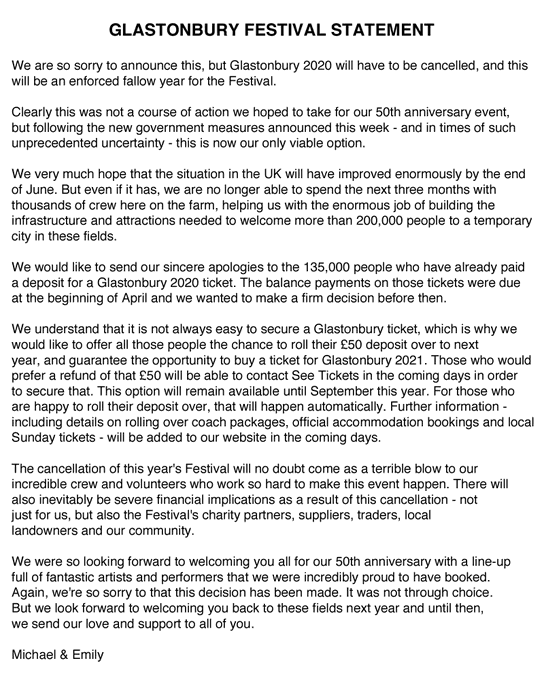 The festival, which would have been celebrating its 50th year in 2020, had a big lineup planned. Confirmed acts included Taylor Swift, Diana Ross, Kendrick Lamar, Paul McCartney, as well as many others.

Glastonbury is not the first summer music festival to make an announcement like this. Last week Coachella was postponed until October 2020, and a few days ago Radio 1’s Big Weekend announced it would not be going ahead either.

COVID-19, the official name for the disease caused by coronavirus, has now infected around 185,000 people worldwide, per WHO figures from March 17, 4pm CT. Over 7,500 people have died.

Everything coming to HBO Now in May 2020